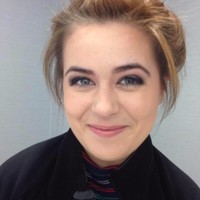 Why did you choose German as your major?

I lived in Germany for just over a year in high school, first through the Congress Bundestag Youth Exchange (CBYX) program for high schoolers, and then through a smaller independent exchange program. During my time in Germany, I lived in Stralsund, a small yet vibrant city off the northeastern coast of Germany. It was during my first German class at Rutgers (German 231 at the time) that I decided to pursue a major in German, mostly due to the encouragement and support of the faculty.

Classes were so fun! I took a variety of courses in literature, film, philosophy, theater, and media. The interesting part about studying media in a foreign language is that you have the double-benefit of 1) learning a language and 2) learning the theoretical frameworks through which people discuss works of art, literature, film, etc. That is to say, I could have my Adorno cake, and eat it, too.

What still stands out to me as the highlight of my entire university career is that I felt as though I got to know everyone in the German department. Building connections with the many wonderful professors encouraged me to study harder and work harder on my assignments. I also loved the extracurriculars in the department -- one of my good friends, also a German major, ran the German movie nights for a year. In a university as massive as Rutgers, it felt crucial to find a niche as quickly and seamlessly as possible.

What is your current position, what do you enjoy most about it?

I am working as a Native English Instructor at an English conversation school in Kawasaki, Japan. I teach English to students from as young as five years old to students using English every day in their professional lives. It’s a dynamic job; I’m never bored. I’ve gotten to know many interesting people. I credit much of my intercultural awareness to the time I spent both in Germany and studying about German language and culture from my time at Rutgers.

What was your first job after Rutgers and how did you get it?

I worked in a cafe in Philadelphia for about six months -- I got this position just before I graduated, and then moved back to my hometown of Alexandria, VA, and worked in a chocolate shop. There’s no shame in working retail to make ends meet. It might not be the most lucrative beginning to your career, but the point is to keep moving forward and set your sights high while making some money. Success stories don’t necessarily happen the second you leave university.

Incidentally, while working at the second job, I met a couple who, after talking to them for a little, mentioned being close friends with one of the German professors who taught me in Berlin during a study abroad program. The world is an incredibly small place.

How did you move from that first job to your current position?

I knew before graduating university that I wanted to work abroad, specifically within Japan. While working at cafes, I applied to a variety of programs to teach in Japan, emphasizing my time spent in Germany and studying German as a sign of my interest in working internationally. Mind you, teaching English overseas is not an end-goal for me, but rather a stepping stone. In the next year or so, I anticipate moving into an international career in some respect, whether working remotely for an international company or moving abroad once more.

Looking back, what classes or experiences at Rutgers would you point to as contributing to your successes?

During my time at Rutgers, I had the incredible opportunity to study abroad twice -- first with a joint-run program between another U.S. university and Rutgers in Berlin; and the second time with the Freie Universitaet in Berlin Summer program. Being able to put to practice my cultural and language skills in Berlin was a wonderful experience. I have many fond memories of both summers, in particular the theater productions I saw. Many of the fundamentals of German courses (i.e., grammar intensive courses) helped inform my knowledge of English grammar, which has of course informed my career in Japan currently.

What advice do you have for our current Arts and Sciences students?

The Beatles said: “And in the end the love you take / is equal to the love you make.” This is the best piece of advice anyone can learn, not only in university, but anywhere in the world.

Make genuine connections with everyone -- faculty, fellow students, your seniors, those younger than you, your mailmen, the hardworking people in the dining halls, the people you meet when studying abroad, the bus drivers, and so on. You don’t need to be chummy with everyone you meet, but if you come from a place of honesty and goodwill, everyone else will reflect the same back toward you. You truly never know what others have to offer. Life is ultimately about the bonds you form with others. Everything else is secondary to that.

Other than that: go to class, read your books, take good notes, and send emails!