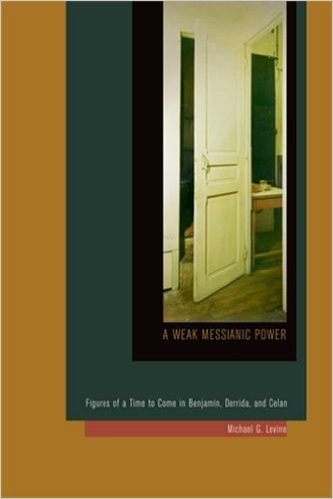 A Weak Messianic Power: Figures of a Time to Come in Benjamin, Derrida and Celan, Fordham University Press, 2013.

In his famous theses on the philosophy of history, Benjamin writes: “We have been endowed with a weak messianic power to which the past has a claim.” This claim addresses us not just from the past but from what will have belonged to it only as a missed possibility and unrealized potential. For Benajmin, as for Celan and Derrida, what has never been actualized remains with us, not as a lingering echo but as a secretly insistent appeal. Because such appeals do not pass through normal channels of communication, they require a special attunement, perhaps even a mode of unconscious receptivity. Levine examines the ways in which this attunement is cultivated in Benjamin’s philosophical, autobiographical, and photohistorical writings; Celan’s poetry and poetological addresses; and Derrida’s writings on Celan.