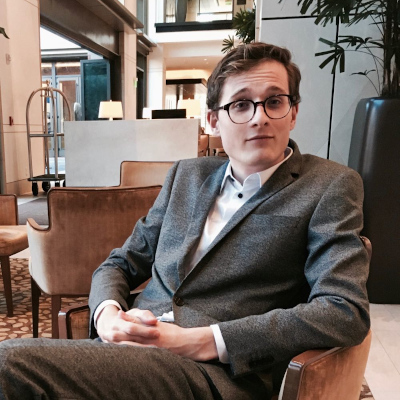 Dominik Zechner will join the department in Fall 2020.

Dominik Zechner studied media studies and philosophy in Vienna and New York before starting his doctoral studies in German literature at NYU. His dissertation explores the problem of finitude in the work of Franz Kafka and the intellectual context of the early 20th century. At the moment, he is developing a larger research project on the intersections between education, violence, and sexuality in 20th century pedagogical narratives. His broader research interests include philology and hermeneutics, literary theory, theories of education, literary modernism, Austrian literature and culture, and pop culture.

Dominik has edited a special issue of Modern Language Notes on the topic of literary prizes and acceptance speeches, and has published essays on Jacques Derrida, Franz Kafka, Thomas Bernhard, and Friedrich Kittler. Currently, he is working on a collected volume on Walter Benjamin’s early work on educational critique and the politics of pedagogy. He was awarded the Otto Mainzer Fellowship, the Young Scholars Prize of the International Walter Benjamin Society, as well as a Mellon Dissertation Fellowship in the Humanities.

During the coming academic year, Dominik will be a Post-doctoral Research Fellow at Brown University’s Pembroke Center for Teaching and Research on Women. And in September 2020, he will begin his new position as Assistant Professor in the Department of German, Russian, and East European Languages at Rutgers University.